If you’ve always wanted to get straighter teeth but have not been able to face the idea of wearing braces fixed on the front of your teeth, then you will be delighted to know that there is another way. 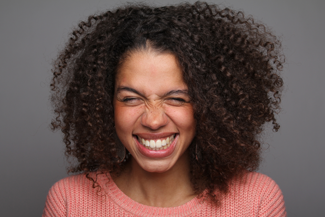 You may not have noticed because Invisalign is so discreet that it’s pretty much invisible. Instead of metal brackets glued to your teeth with wire strung through them, you have a series of aligners. These aligners resemble very thin clear plastic mouth guards; so thin, in fact, that once they are in place, they hug the teeth so well as to become very, very hard to spot.

The difference is that inside each aligner are very carefully placed bumps and ridges. These press on your teeth and in so doing, persuade them to shift out of the way to relieve the pressure. It takes 7-10 days for your body to respond by dissolving and rebuilding bone around the tooth to stop it being pressed on. What you will experience is that the aligner doesn’t fit when you first put it in, but that feeling gradually wears off over the next week to 10 days. Once the aligner feels like it fits perfectly, it’s time to start the wearing next one, which will feel like it doesn’t fit again. And on you go, moving from discomfort to comfort over and over again until you have worked your way through the entire series of aligners.

Once you reach the end of your treatment, you will have beautifully straight teeth. In order to keep them that way, you will have to wear a retainer for some time afterwards. This holds your newly moved teeth in place while the new bone settles down around them. You can have a retainer bonded to the back of your teeth, or wear one that looks like a mouth guard at night.

My daughter has been receiving treatment for the past years and I have always found the staff to be very friendly and [...]